Using the A3, 7-step process, the team brainstormed potential causes for this problem of generating unusable parts of the product. These were direct causes and not necessarily root causes at this point. Based on experience and available data, the team was able to reduce the list to a few causes.

At this point, the team went to the actual production line (aka Gemba) and conducted a few simple experiments using the refined list of causes (factors). The team observed, and took measurements with video clips, which were evaluated later in the meeting room. It wasn’t long before the direct cause of the problem was determined and, by using the 5-why process, the root cause was reached. The team simply followed the funnel diagram below. 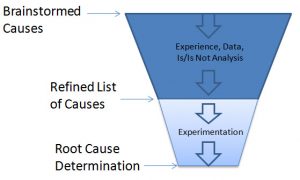 The takeaway from this improvement initiative is the importance of conducting root cause analysis using experiments right where the problem is occurring as opposed to doing so in a conference room. For management, it is important to allow time for experimentation on the production line and to let the team, including production workers, be creative in troubleshooting the issues and generating solutions.